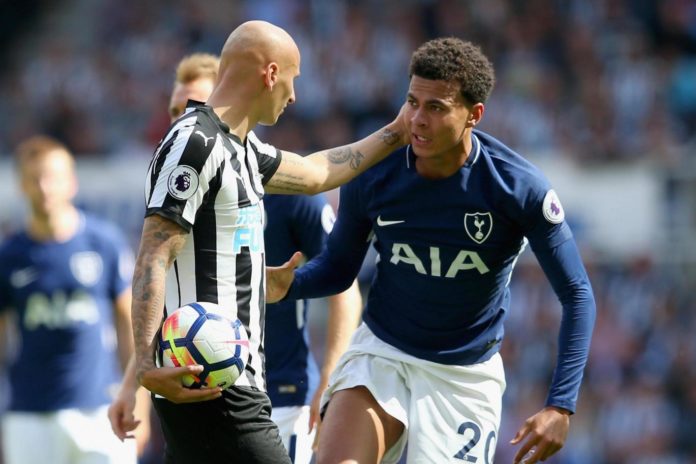 Eriksen & Spurs are losing the otherwise safe CL ticket and HAVE to win. It should be possible against a formidable Newcastle team who only has the honor to play for, but Tottenham was poor at the weekend and is midfield weak.

Tottenham (No. 4) has had a much better season than Newcastle (No. 10). When the game is running, high-pressure and varied Spurs are very strong.
In the reverse showdown in August, Spurs won 2-0 in Newcastle (who stood 0-0 when Toon midfield defeat Shelvey got red red).
At Wembley (“home ground” while new stadium is being built instead of White Hart Lane), Spurs is 11-4-2 (34-12). Magpies are generally weak outside: 4-4-10 (18-29).
After a failed 3-4-3 attempt at WBA, Spurs returns to 4-2-3-1. And possibly with the fast and skilled flee Lucas who starts after good replacement.
With just 2 points down to Chelsea midfielder Christian Eriksen and Tottenham have to win here – it’s a CL ticket.
Newcastle has dermod only the credit to play for and played badly and lost 3 consecutive times since the team secured against relegation.
The team still lacks Atsu wingman (since 7/4), Assassin Slimani and probably defender Clark (28/4). In addition, enough turnover (* trupnyt).
The head of Newcastles spurs spurs 2 years ago, midfielder Sissoko, now plays in Tottenham and may well start in this match.

Magpies are free of drowning and can play freely. Can they find motivation, they may well become dangerous.
After three bad United matches in a row (it was better in second half against Watford) manager Benitez has cried out loudly for his players. Maybe high enough.
If they listen, they are experienced and turn Benitez happy man to put a solid and powerful Toon team.
It’s only 2 years since Newcastle, without anything but the honor, to play for 5-1-spelled Spurs who played for silver and to keep Arsenal behind.
Tottenham has either got a rubber ribbon or has been tired: 1-1-3 in the last 5 matches and the last bad game in the 0-1 loss at the WBA backlogs.
The defender Vertonghen got a scrub (and was ringing). Is probably enough, but what two are there among him, Alderweireld and Sanchez if 4-2-3-1?
At the def midfield there is no need against WBA Dembélé and Dier (and Winks still out). The replacements, Wanyama and Sissoko, are theoretically a good couple, but does it work?
Spurs top scorer Kane works down in a shape wave. But dare manager Pochettino take the consequence and use, for example, Son in front?

Soccer Prediction of the Day Tottenham vs Newcastle United

The main absence and doubt should be mentioned above. In addition: Spurs still without rightback Aurier – but competitor Trippier has nevertheless been better. Davies probably gets his starting point back on Tottenham’s left back (although I think Rose is better and I do not think he fell through to the WBA at a rare start).

The question is how much turnover Newcastle is driving. But turnover will be enough. First of all, to save some who are tired of Saturday’s battle, partly to sell someone who played badly. It can then provide space for fresher and motivated forces, but motivated and healthy ideal starts would be better than ditto reserves.