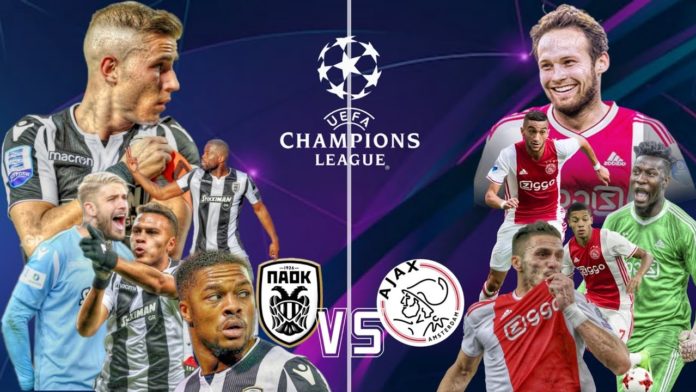 Champions League semi-finalists 2018/2019, Ajax will need to sweat to get a place in the group stage of the 2019/2020 version of the competition. It will open on Tuesday, August 6, its battle for a spot in the tournament against Greece’s PAOK. The match will be played at the Toumba stadium in Thessaloniki, starting at 2 pm (Brasília time). The return game is scheduled for August 13.
The Champions League is in its fourth qualifying round to define the last six teams to take place in the group stage in its 2019/2020 edition. It is the last step that gets its name.The 10 clubs out of the 20 that have survived this stage will play the so-called playoffs, which already have two pre-ranked teams, namely Young Boys from Switzerland and Slavia Prague from the Czech Republic.

Tuesday’s duel will be PAOK’s first official game on Tuesday. The team secured the right to participate in the Champions League qualifiers by winning the Greek Superleague title in 2018/2019. As the country does not have a good position in the ranking of UEFA Champions League organizers, it needs to go through the selective to win the place in the group stage.The national title was won unbeaten and with 80 points accumulated (26 wins and four draws – two points lost in the carpet). Five-point lead over Olympiakos, runner-up. At home, the campaign bordered on perfection. There were 14 wins and a draw (43 points) with 37 goals scored and five conceded.The preparation for the season had eight friendlies in July. The team lost just one game, just the first, to a Dutch team, Alkmaar, by 1-0. They beat Nordsjaelland, from Denmark, 3-0, Universitatea Cluj, from Romania, 5-0, St. Truiden, from Belgium by 4 to 0, Anderlecht from Belgium by 3 to 1 and Fortuna Sittard from the Netherlands by 5 to 1; and tied with Zwolle from the Netherlands 2-2 and Al-Taawon from Saudi Arabia 2-2.

Not even having advanced to the last Champions League semifinals, when they were dramatically eliminated by Tottenham with a goal from Brazilian Lucas in the second finals of the match, was not enough for the Netherlands to secure a direct berth for your champion in the 2019/2020 group stage of the Champions League. Thus, Ajax will have to go through the qualifiers to be able to try to repeat the success of the previous version.The team even started their season well by placing another trophy in their gallery. They beat the Dutch Super Cup by scoring 2-0 at rival PSV. However, he stumbled on the opening day of the Eredivisie 2019/2020 season. On Saturday, August 3, as a visitor, he was 2 to 2 with Vitesse, having been twice behind in the scoring.Ajax suffered major casualties from the team that shone last season.

Football Prediction of the Day PAOK vs Ajax

Despite losing key players, Ajax remain the base of the previous season and even as a visitor has the prognosis in their victory against PAOK as the best guess for Tuesday’s match for the fourth round of the knockout round. 2019/2020 edition of the Champions League.