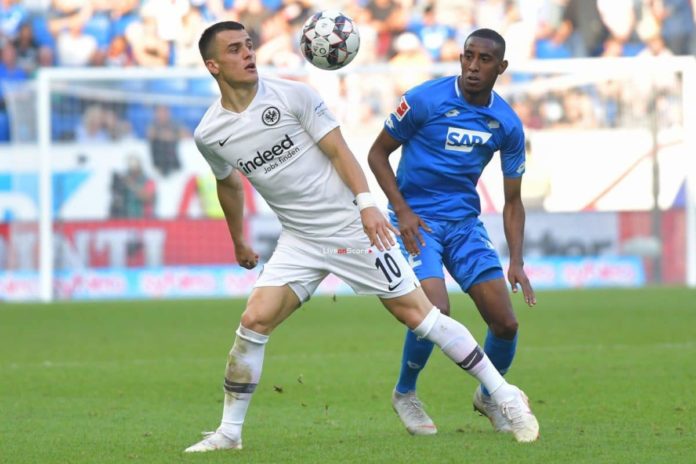 Frankfurt vs. Strasbourg Betting Tips – The guest team tries to return the 0-1 result obtained in France.

1. The latest information before playing Frankfurt vs Strasbourg.

He lost in the last match of the championship, the count of RB Leipzig, score 2-1.
In the tour he had more goals than Strasbourg but even so he lost by 1-0.
He finished 7th in the Bundesliga last season and entered the European competition in the preliminary round II.
The opponents so far have been small teams, Flora Tallin and Vaduz, in front of which they won both in return and in return.
He also won the first two official matches in domestic competitions, 5-3 with Manheim in the German Cup and 1-0 with Hoffenheim in the Bundesliga.
He played 4 friendly matches in this competitive break with 2 wins, one defeat and one draw.
Adi Hütter took Eintracht in the last edition of the Europa League until the semi-finals, eliminated by Chelsea at 11m.
According to information provided by kicker.de, Bas Dost has signed with Frankfurt.
Luka Jovic and Sebastian Haller are no longer in the lot, players he sold for 60 and respectively 40 million euros!
The offensive players he approaches this season are Ante Rebic, Paciencia, Gacinovic, De Guzman and Jovelic.
Adi Hutter cannot rely on this game for Djibril Sow, Rebic and Marco Russ, all 3 injured.

It comes after the defeat with the score of 0-2 recorded in the home game with Rennes.
Passed by Lok. Plovdiv in the third round of the Europa League after 2nd overall.
It has two major advantages, namely the fact that it has played 4 official matches so far in the Europa League preliminaries and that it starts with 0-1 this match.
He did a good training period because he managed to win in all the 4 games played.
He defeated Zurich 2-1, Standard Liege 2-0, Toulouse 3-1 and UNFP 3-2.
Last season he managed to score 49 points in 38 matches and thus finished 11th.
He has a good chance of reaching the Europa League groups and that would be a great performance.
Anthony Caci and Lebo Mothiba are not 100% physically and not sure if they will play

They met twice in their history.
Each team winning one match.
In the last match Strasbourg won at home 1-0.

4.What is the form of the teams in the last 5 matches?

Eintracht is going through a very difficult time and risks losing the qualification in the Europa League groups. The Frankfurt group seems to have entered the black series they had at the end of last season, ending with six matches without victory. The players trained by Adolf Hutter were defeated by Strasbourg in the playoff round, and three days later they also gave up the championship, on Leipzig’s field. Coming this week, Sporting’s former goalscorer, Bas Dost, is not eligible for a return with the French.Eintracht Frankfurt has made two “victims” this summer. In the preliminary round 2 he had fun with the Estonians from Flora and immediately after giving no chance to Vaduz, of which he went 6-0 overall. However, he has three wins at home and can hope to qualify for Strasbourg. Since 2006 she has not been defeated, on her own field, in a match in the Europa League (or UEFA Cup, as it was called in the old format). In this period he obtained 11 victories and 4 draws.

Strasbourg is in obvious growth of form. Two years after returning to Ligue 1, the Alsace team is close to qualifying for the Europa League. Racing finished the championship in 11th place, but the success of the League Cup helped it to reach the continental competitions. So far it has gone through two preliminary rounds. He first eliminated Maccabi Haifa with 4-3 overall, after which he won a double victory with Lokomotiv Plovdiv. Against the Bulgarians it was a 1-0 draw.The same score was recorded in the tour sleeve with Eintracht Frankfurt. Côte d’Ivoire striker Kevin Lucien Zohi scored the only goal in the 33rd minute. It was the only shot on goal by the hosts – there were six more executions that did not reach the target. Strasbourg was also surpassed in terms of corners. The French had 2, unlike the 7 opponents.

5.News, analysis, statistics and progress on the 2 teams.

Football Prediction of the Day Frankfurt vs Strasbourg

I don’t think Frankfurt will miss this qualification in groups.
The hosts have 8 wins in the last 10 matches.
On the other side, Strasbourg failed to win any match in the 3 stages of France.
I think the best bet for this match would be to qualify Frankfurt in groups.