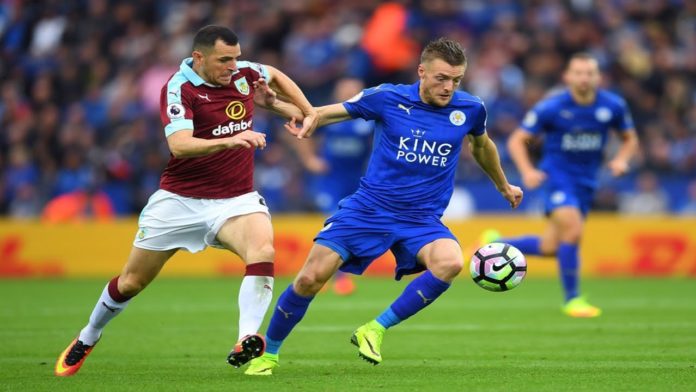 The Leicester – Burnley match will take place at King Power Stadium and will be refereeed by Jonathan Moss. In the following rows you will find information about the two teams, but also some football tips that I hope will come out.

▪️He is in an honorable place 4 and has collected 14 points in the 8 rounds. In 8 of the 10 duels this season he has registered and has 3 in which he escaped without collecting a goal.
▪️Only 2 defeats suffered and out of 10 games he won 6, which is right, a victory coming in the League Cup, at penalties.
▪️On her own ground she is undefeated and the first game is the only one in which she got involved.
▪️Matty James is injured and the chances of getting on a turf are too soon. It is a problem also with the young midfielder James Maddison who is uncertain, not being well developed physically.

▪️He did well enough because he is 7 with 12 points in 8 stages. Liverpool is the only one against which he did not score and in 3 of the 9 disputes he did not receive a goal.
▪️He has won 3 victories, but he also has 3 defeats, and so many times he ended in a draw.
▪️It did not prevail in any of the 4 trips in which it was, but only in the one of Arsenal was defeated.
▪️Daniel Drinkwater will be missing due to an injury according to thesun.co.uk. Erik Pieters, Jack Cork and Johann Gudmundsson have minor medical problems and are therefore uncertain.

◾️Last season Leicester was unbeaten both in return and return.
◾️He forced himself away, but at home he only got one draw.
◾️Burnley has not won in such a move since 2007, while both were in the Championship.

▪️Leicester surrendered in the previous round, 1-2 on the field of the Champions League trophy holder, Liverpool, following a goal collected from the penalty kick, in the fifth minute of the game extension.
▪️As a result of this defeat, the team prepared by Brendan Rodgers comes down to the fourth position of the Premier League standings, with 14 points accumulated after the first 8 stages, positive scoring +7 for “foxes”.
▪️Accidental in the corner of the English national side, central midfielder James Maddison is completely restored and announced among the incumbents on Saturday’s game against Burnley.

▪️In the final stage of the championship, Burnley prevailed with 1-0 against those of Everton, thus ticking the fourth consecutive positive result. The only goal of the match was scored by right midfielder Jeff Hendrick in the second half.
▪️Thanks to this victory, Sean Dyche’s students climb to the seventh position of the standings, 12 points, positive goal +2, balance three wins, all equal results and two defeats suffered so far in the current season.
▪️Injured in the previous round, Dutch left-handed defender Erik Pieters is again fit for Saturday’s game.

▫️Leicester did not receive a goal in the previous three direct meetings on their own ground.
▫️He won the last three games in front of his supporters in the championship.
▫️In 5 of the last 6 matches played in the Premier League, there have been over 2.5 goals.
▫️She is unbeaten in the previous 8 direct meetings played at “King Power Stadium”.
▫️He scored at least one goal in 6 of the 8 stages since the start of this championship edition.
▫️He has drawn in the previous three trips made in the Premier League.
▫️2.5 goals per game is the average of goals scored in Burnley’s matches this season.
▫️In the 4 trips made, both protagonists scored at least one goal.
▫️He drew the break in 4 of the 8 disputed stages.
▫️He has not won any of the last 6 away games played in the championship.

Football Prediction of the Day Leicester City FC vs Burnley

I think the show will not be missing from King Power Stadium. I give up two formations that look good on the attacking phase, but both are empty with a lot of ease. In addition, there are no reasons for any of them to defend themselves.Leicester has good football forwards such as Tielemans, Maddison or Vardy. \ “Foxes \” come after 4 matches in which he has registered at least 3 times, and that says a lot about their style of play.Burnley has quality players on offense and here I mention only the two tops, it’s Barnes and Wood. She was in 4 trips in this championship and in 2 of them the barrier of 2 goals was overcome, but in the other 2 it was reached.