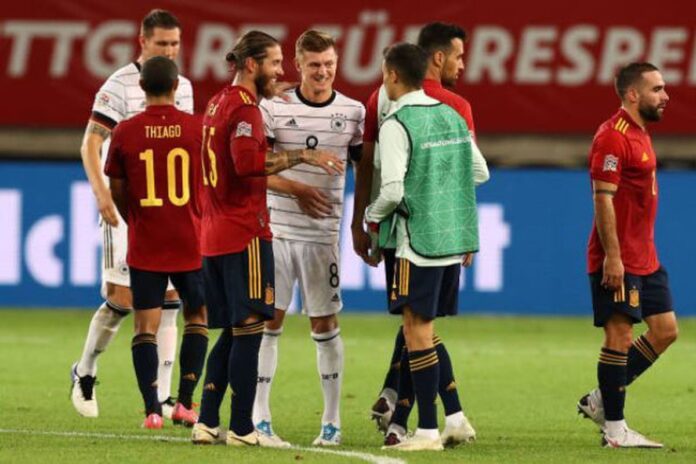 This Tuesday, November 17, 2020, Spain host Germany in a match counting for the 6th and final matchday of Group 4 of League A of the Nations League.
The match will take place at the Olympic Stadium in Seville (Spain) and the match will kick off at 8.45pm.
On the previous day, Spain drew Switzerland and Germany won at home against Ukraine. In the standings, Spain is 2nd with 8 points and Germany is installed in 1st place with 9 units.

▪️In the past, Spain and Switzerland have met 12 times since 1936: 6 wins for Spain, 7 draws and 11 wins for Germany.
▪️In the first leg, the Germans and Spaniards separated in a draw of 1-1 on September 3.
▪️La Roja have not won any game in the last 3 encounters against Germany (2 draws and 1 loss).
▪️The duel will bring together the best defense (Spain, 3 goals conceded) and the best attack (Germany, 10 goals scored).
▪️Germany’s Timo Werner, who scored 4 goals since the start of the competition, will be one of the players to watch in this match.
▪️Spain remain on an 8-game winning streak at home.
▪️Germany are unbeaten away from their last 6 trips.

Football Prediction of the Day Spain vs Germany

On Saturday evening, Luis Enrique’s Roja conceded a draw in Switzerland against the Swiss selection. This result had consequences in the standings as Spain were stripped of their leader’s chair at the expense of Germany … their next opponent.
The match between the Spaniards and the Germans promises to be exciting as the winner will take part in Final 4 of the competition in October 2021.